You are here: Home / A Care Manager was Jeff’s Lifeline 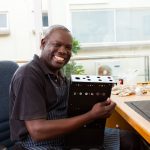 Michael Gross has cared for many individuals going through the trauma of homelessness, but one gentleman stands out, mainly because he reminds Michael of his own brother who also faced homelessness.

“Jeff” is in his mid-40s and Michael first met him when he turned up one night at the winter hypothermia prevention shelter operated by Cornerstones. Like Michael and his brother, Jeff came from a tight-knit family, with two working professional parents who made sure Jeff got a good education. Indeed, graduating college as an IT specialist, Jeff entered the workforce with highly marketable skills. Unfortunately though, he could only ever find contractual work; extremely well-paid work, but sporadic and with months in between contracts when he wasn’t working.

Jeff had two children and, when he was employed, life was good. But then the relationship with his children’s mother ended, and those long periods of time without work meant that he fell behind on child support payments, which led to legal action against him, which led to delays in getting security clearances for the contractual work he relied on, which led to frustration and anxiety and binge drinking…which finally led to homelessness.

For four years, Michael was a lifeline to Jeff. As his care manager, Michael connected Jeff to the resources he needed to get back on track; but it took time for Jeff to build up his life again and twice fell back into hopelessness and homelessness. Michael never gave up on Jeff. He knew that constancy of contact and knowing where he could turn for support – in an environment where he would not be judged – would be critical to Jeff’s survival and, ultimately, to him beginning to thrive. In short, Michael wanted to give Jeff the care and support he wished his brother could have had.

Jeff has now been housed for over a year and, although his work is still contractual, he is managing his career better. He is also managing his child support payments, together with the arrears, which gives him hope that his kids will see him for the father he has always wanted to be. And he still finds time to stop by and see Michael at Embry Rucker Community Shelter, where he knows he will find the welcome, the smile, the open ear, and a sense of connectedness that we all need…whether we find ourselves homeless or not.

Click here to read why helping the homeless is not just a job Michael Gross — it’s personal.