When a group of friends made a gesture more than 20 years ago to honor the late Embry Rucker—an Episcopal priest and advocate for the homeless—I wonder if they could have ever imagined it would transform into an annual golf tournament that has collectively raised more than two million dollars for the 70-bed homeless shelter in Reston that now bears Embry’s name.

Your support of the tournament over the years has enabled Cornerstones to connect our clients to vital resources and a comprehensive array of programs and wrap-around services that solve urgent or on-going requirements for housing, childcare, food or financial assistance—all with the goal to sustain healthy families, secure housing, and financial independence.

Cornerstones recognizes that the way our donors are engaging with our mission is evolving as they look for more meaningful and direct connections with those we serve. We are committed to providing these connections with new and compelling approaches to our fundraising efforts. We are listening and collaborating with our supporters, embracing the opportunity for change. This means postponing, for now, some of our traditional events, including the Rucker Memorial Golf Tournament.

We invite you to be a part of our initiative to develop new and compelling approaches to our fundraising efforts by joining us for an “Experience Cornerstones Virtual Tour” where we share further insight to Cornerstones’ mission and the important work that we can do together. Please visit our Experience Cornerstones page to select a tour date that best fits your schedule.

We know that by championing Embry’s compassion and commitment to those in need, there is much we can to do together to improve the well-being of our community. We are truly grateful for your support. 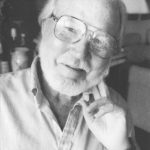 as a peace-loving but strong-willed man, Embry Rucker always cared about the story within every person he met. He was serious in social activism, but playful in his social interactions. Many people in the area benefitted from his charitable events, his social service initiatives, and his friendship.

He started his life in Reston in 1969, when he decided to plant a church to meet the needs of the community. The first service was held on February 23rd, 1969 in a storefront building in Lake Anne Village Center in Reston with forty-two people. Embry quickly realized the growing need for social programs, and the call to help others, starting with himself. He began with Common Grounds, a coffee shop that he opened and ran, with the help of volunteers, in the Lake Anne Village Center. Common Grounds became the watering hole for every kind of person in Reston, and Embry used it as his ministry. From troubled youth to the elderly, they all flocked to Common Grounds, where Embry would sit and talk with them, seeing his customers as people rather than problems. From Common Grounds grew a multitude of programs that were initiated by Embry Rucker. These included a babysitter referral service, a childcare service, a teen jobs referral service, a nursing service, the Greater Reston Center of the Arts, and Reston’s first bus system.

The foundation for these services was Embry’s love for people, and his dedication to serve them. He would preach the acceptance of all people, no matter their background, and his goal was always to serve. He was a driving force for change in community, and his vibrant personality sparked others to get involved. Up until his death in 1994, he stayed committed to his passion for social justice, testifying in front of the Board of Supervisors to get a homeless shelter in Reston.

The homeless shelter in Reston was named after Embry Rucker because of his spirit. He was the voice of the voiceless, and his spirit lives on through this golf tournament and the homeless shelter. His life and legacy are a testament to the difference one person can make in the world.