You are here: Home / Sumayah’s Journey 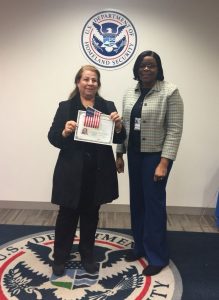 Sumayah is originally from Baghdad, Iraq. While she lived a very comfortable life with her husband, son and two daughters, Sumayah’s family, like many families in Baghdad, lived in fear because of the dramatic increase in cases of child abduction. International reports have recently shown that almost 1,500 Iraqi children were kidnapped over the past three years. Sumayah’s son became one of the abducted children.

Tragically, most of the abducted children are not released back to their families. Sumayah’s son, however, was returned after his family paid a ransom to the kidnappers. But it was no longer safe for the family to remain in their homeland.  They had to escape the horror that surrounded them. Thus, they began their journey from Baghdad to Amman, Jordan.

Sumayah’s son is desperately ill in a German hospital. Having only an Iraqi passport, Sumayah cannot get a visa to travel to Germany to be with him.

Cornerstones’ free American Citizenship class, lead by Gillian Sescoe, provided Sumayah the support she needed to start her journey back to her son. Sumayah became Cornerstones’ 127th student to pass the American Citizenship exam. When UCIS (United States Citizenship and Immigration Services) heard of her plight, she was able to expeditiously take the oath of citizenship. She will soon receive her American passport and begin her journey to Germany to reunite with her son.